A participant can have one of the following roles:

A host is a user who creates a meeting or a participant that gets promoted to host by another host. A host cannot be expelled from a meeting and is the only role with the ability to lock or end a meeting. The host of a meeting is also its default initial podium holder, meaning that he/she starts a meeting on the podium. In case of a meeting with a public scope, the host selects a default role for public access. A host can promote or demote any participant to a different role during a meeting, either directly or following that participant's promotion request.

User on the podium becomes an active speaker with superior permissions relative to his initial role. The most important podium feature is public slide navigation (assigning the global focus to a shared slide). Podium holder can pass the podium to any other meeting attendee or leave the podium, thus making the meeting non-moderated.  A host can force the podium holder to leave the podium.

A presenter is a participant with the ability to add/delete slides or live content. Presenters may also annotate the content and broadcast audio and video. A host can assign the presenter role to multiple participants, depending on the type of the meeting. In sessions with a small number of participants, a host usually plays presenter's role.

A guest is a person who has been invited to participate in a meeting as a passive audience member.

A guest can be promoted to a presenter by a host. 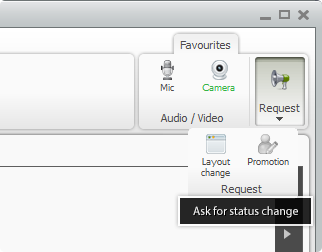 A session participant can request promotion by clicking the "Request" button in the top-right corner (the Favourites section), then clicking the Promotion button as shown below.

A session host can either grant or deny this promotion request.