The formula to calculate the minimum bandwidth for Download and Upload is shown below. 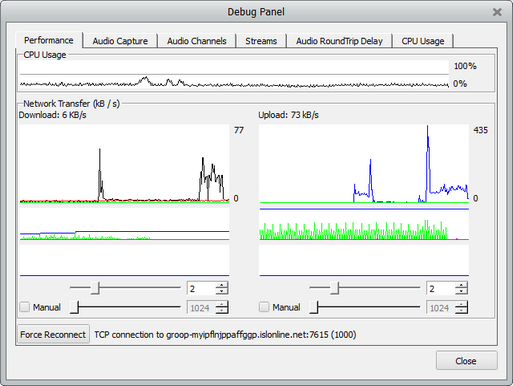 Here is an example of performance tab, when two users are connected with audio and video and the presenter is streaming a part of his screen.

The download monitor is split into 3 different bars. Video, Audio and Desktop Share. The approximate speed of the individual streams are shown below.

During desktop sharing the bandwidth varies depending on the resolution of the screen. The default is set for maximum performance.

...to see an explanation of JPEG Compression please read this Wikipedia article: http://en.wikipedia.org/wiki/Jpeg

The Upload monitor shows the amount of kilobytes per second that are being transferred between both host and remote machines. The higher the rate of transfer the more data is being streamed. So theoretically the more people in the meeting with both audio and video streaming enabled the larger the size of the upload. Please see the list of examples below to find out more facts about how this is worked out.